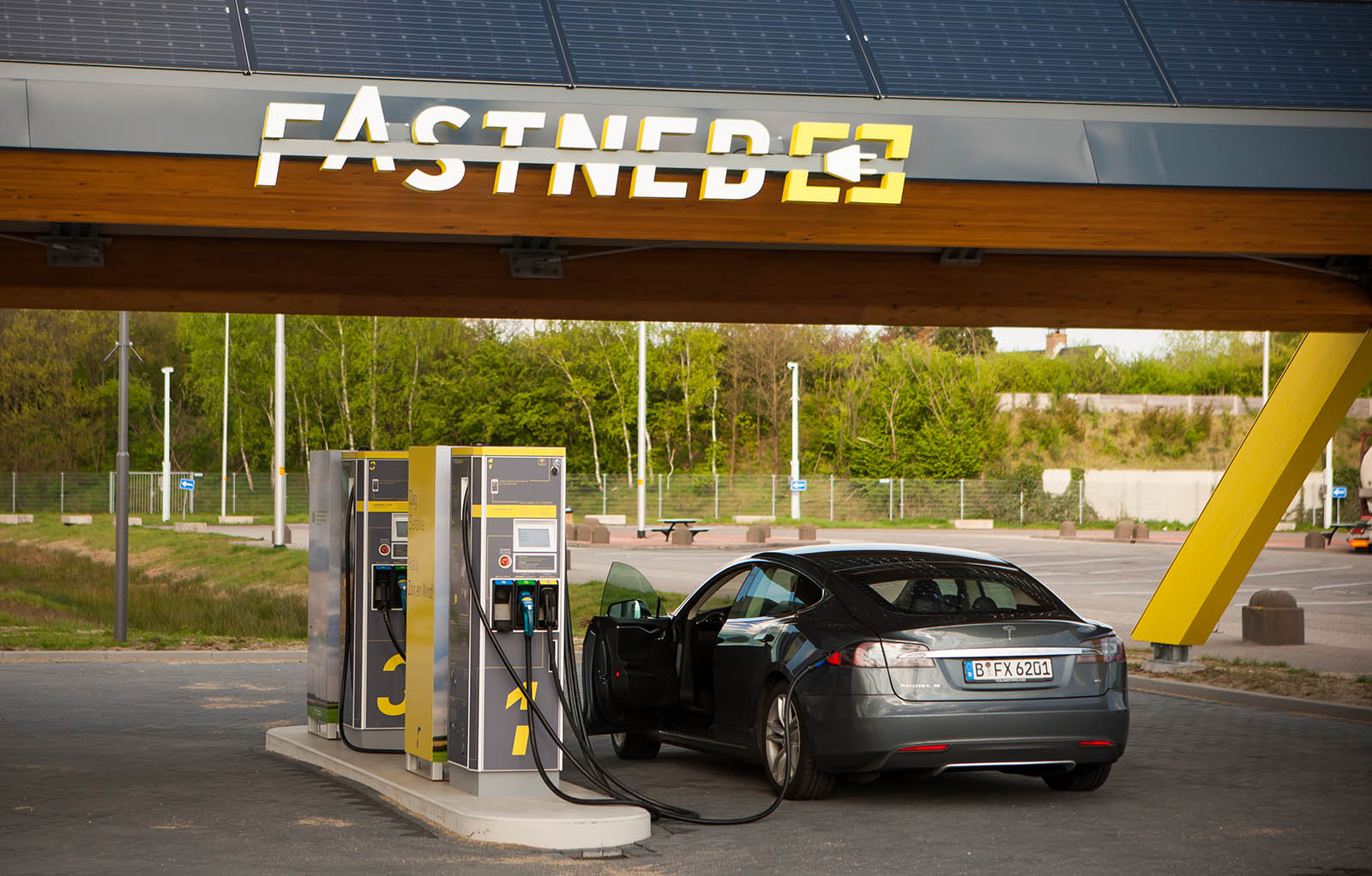 This is a continual post for the First day and the Second day of the Berlin – Amsterdam – Berlin roadtrip with Tesla Model S.

All good things come to an end. The day at Amsterdam was great, but now it was time to continue the road and driving back to Germany and Berlin. The last day began with a route around one of the biggest things ever made by man, the IJsselmeer lake. To reach the 32 km long dam we drove north the motorway A7. From there we continued to Zwolle Supercharger.

Driving in completely flat country with very little forests is somewhat different to German or Finnish scenery. Yet the Atlantic coastline and dozens and dozens of windmills generating the power were intriguing. 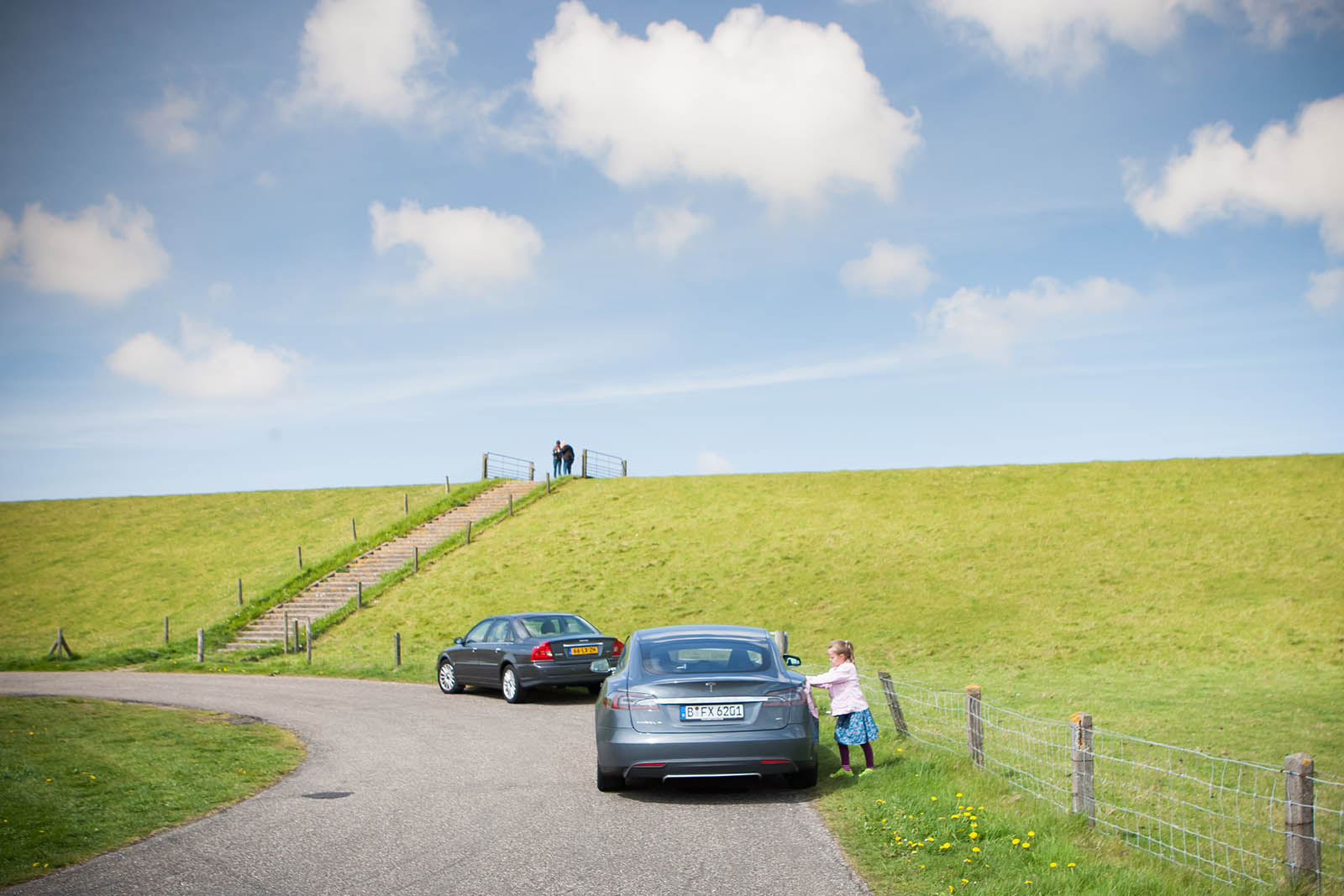 Behind this embankment was the Atlantic – or the North Sea. 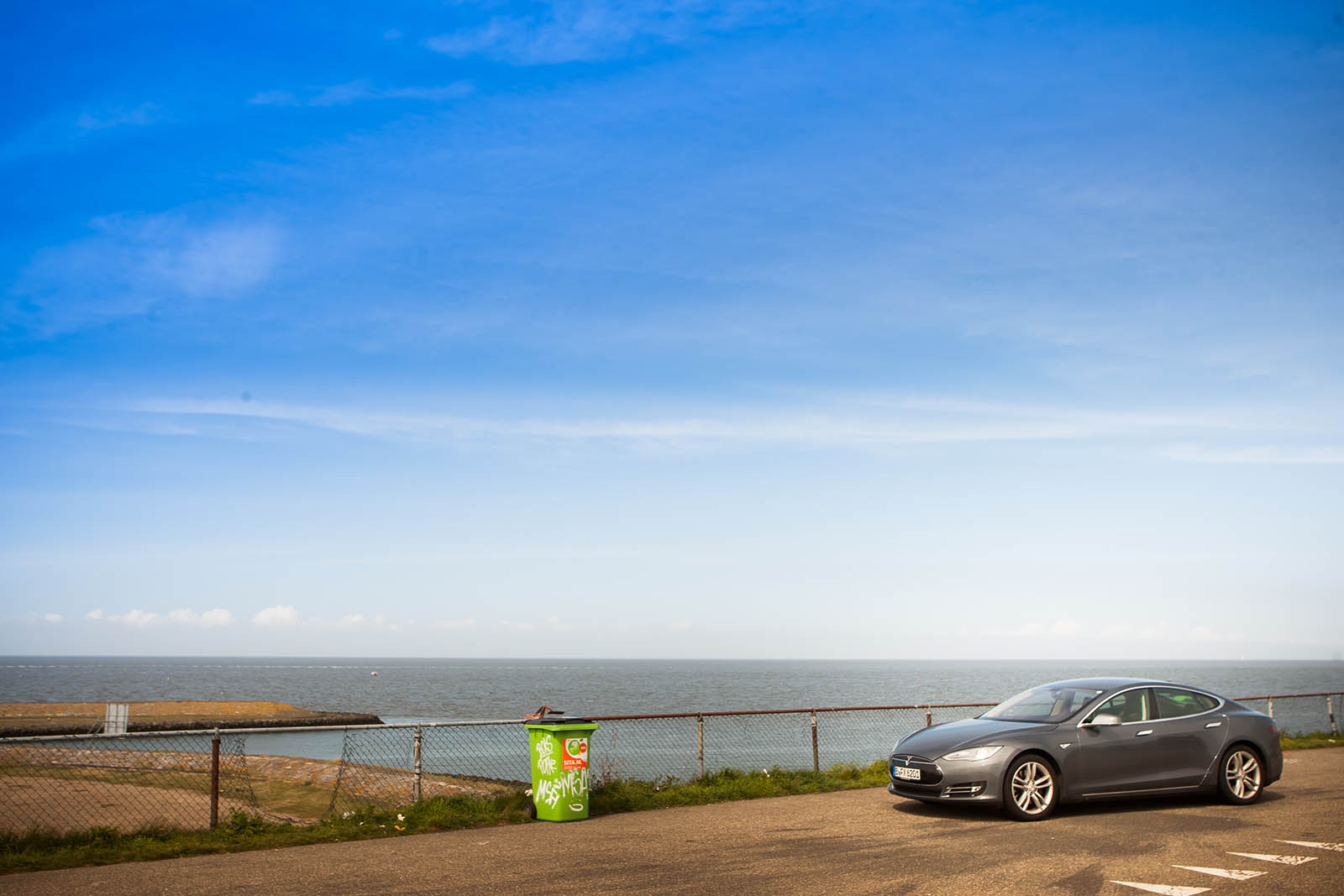 The North Sea at the trash bin.

The thing for this third day was the Fastned charging network. Fastned is the Dutch fast charging network for cars using the CCS or Chademo fast charging standards. Sure you can charge a Tesla too, but not particularly fast. With Type2 “Mennekes” it’s 11 kW or 22 kW depending on the charger at the car. Or if you happen to own Chademo-adapter, you can get 50 kW from the Chademo. That’s about the half of Supercharger.

But for drivers of Nissan Leaf, e-Golf or BMW i3 the Fastned is really good. They are like Tesla’s Superchargers, meaning there’s more than one stall at site and also they are near services like gas stations. What is the issue is of course the pricing: Fastned isn’t free like Tesla’s own chargers. For rapid chargers having the two stalls at site is really essential: Way too often chargers fail, specially with CCS plugs. Software just seems to be difficult.

Fastned has three plans for charging. Price for one kilowatt is 0,83 € max. With 100 € monthly fee you can get unlimited charging. Considering the Nissan Leaf and average of – say – 16 kWh of single charge event, you’d charge seven or eight times a month to break even with fixed pricing. Hard to say if it’s cheap or not, but at least Fastned has made it possible to really travel anywhere in the country all-electric. It’s the situation we’re not even near in Finland. I guess it’s fair to say Fastned is the second most advanced charging network ever made.

Fastned charging is different from Finnish Liikennevirta or Fortum Charge & Drive, as it doesn’t have a RFID dongle to be used for authentication. The only way to use the chargers is the mobile app. Fastned spokesperson said there are no plans to introduce the RFID authentication to Fastned customers.

Sure the app is logistically simple compared to handling vast amount of RFID-dongles out in the wild, but it’s also a bit slower. Take the phone, start the app, choose the charger and go. 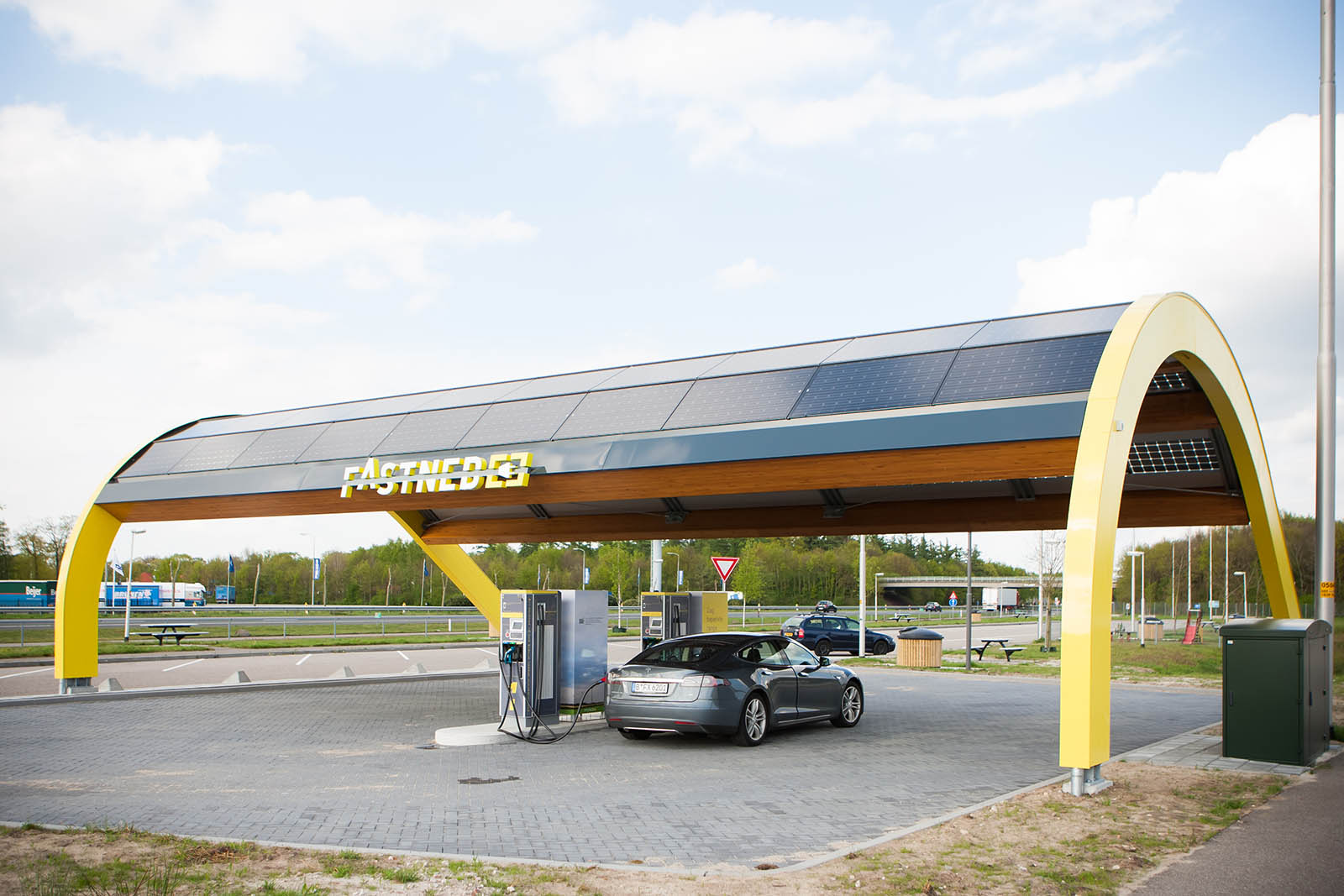 Fastned charging stations are easy to recognize with curved roof of solar panels. 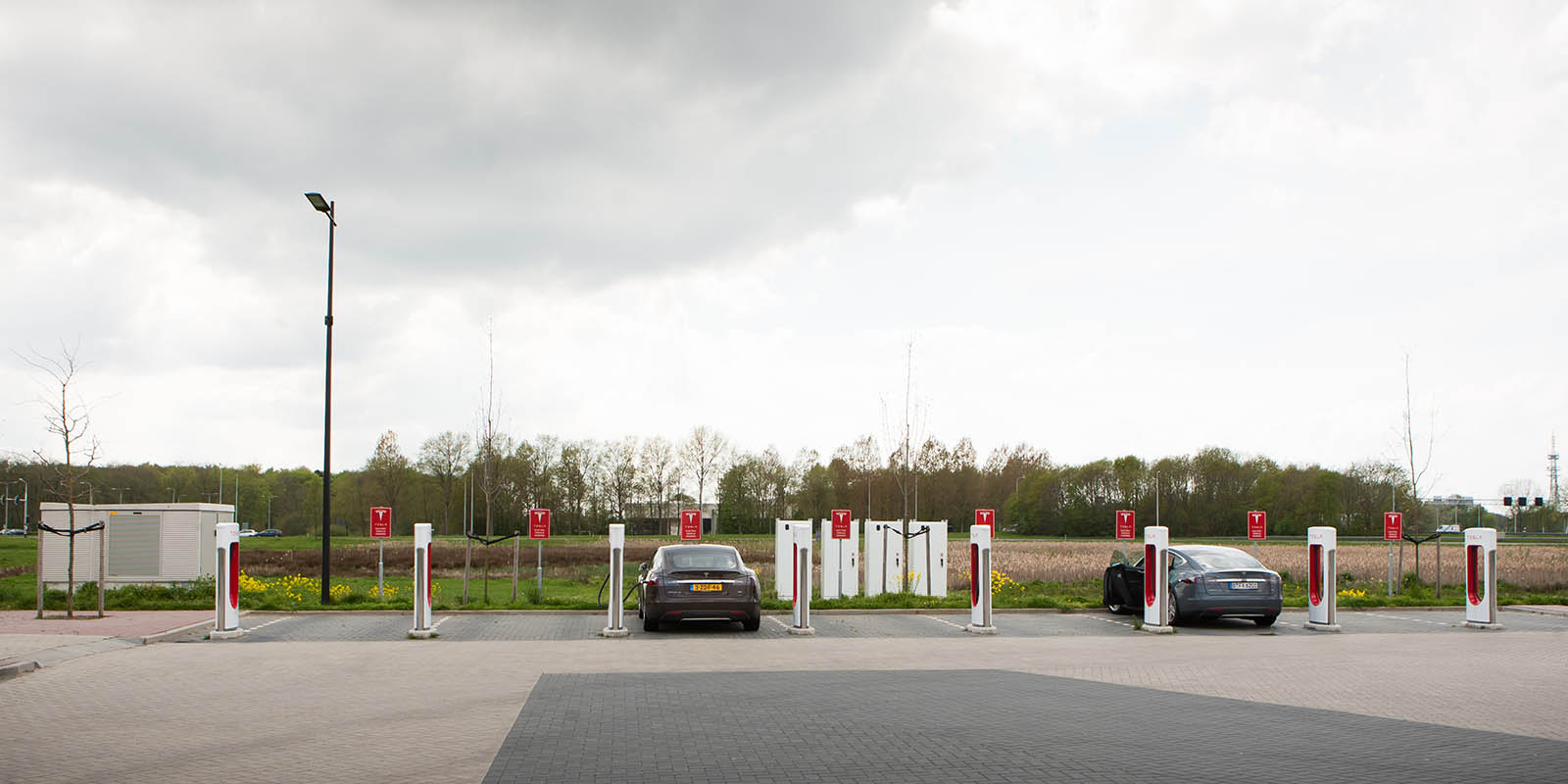 The Zwolle Supercharger didn’t have the usual casing for charger units, which made it really good site to observe the architecture of the site. At the picture above the transformer is at the left side, four chargers in the middle and altogether eight stalls for cars. I’ve drawn a picture too to clarify the Supercharger construction: 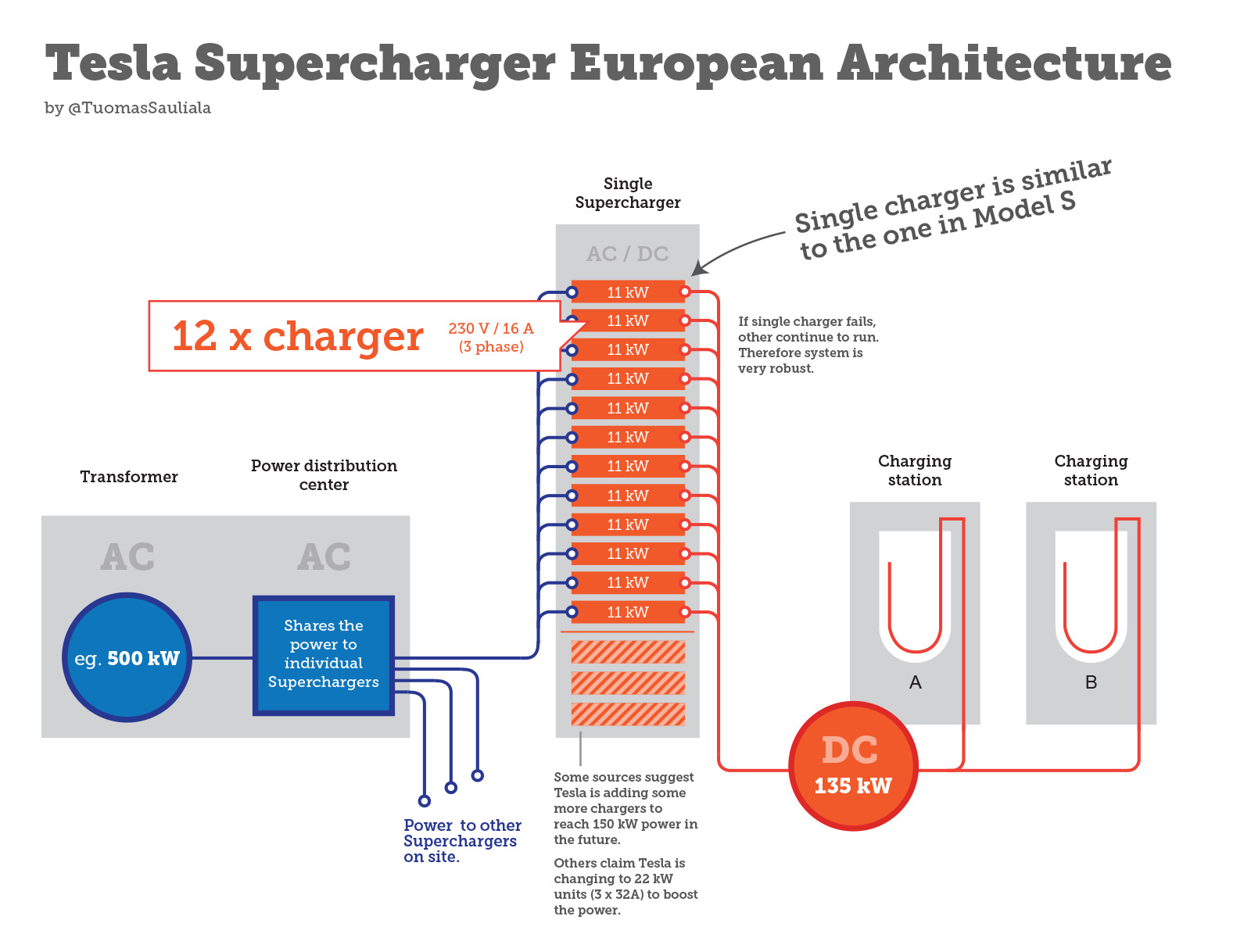 For final night we stayed at Elze-Wülfingen, somewhat near Hannover. But before that, the final charging at Lauenau site. 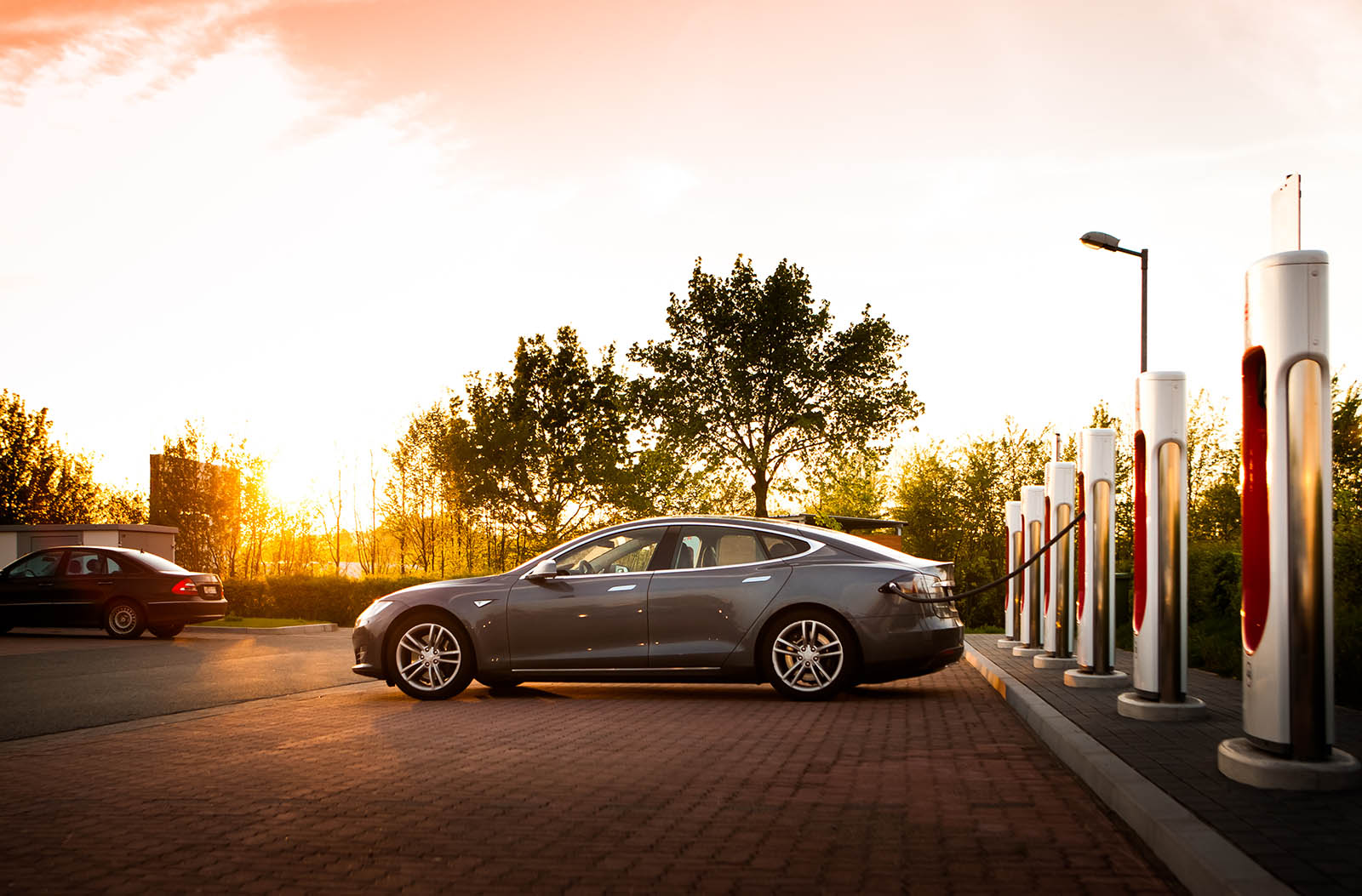 Last day took us back to Berlin. Return of the car and with taxi to Tegel Airport. Everything on this trip went smoothly, except for this one thing: We missed the flight back home. But I think that gave just a little twist to our four days at German Autobahns and Dutch motorways.

At the end of 2014 I was driving the Alps with Model S, P85. How would this trip compare? Well, at least the Superchargers really proved them selves this time. When travelling with kids you really don’t want to wait at some slow charger for hours just to make it possible to drive for hundred or two kilometers. Superchargers really work. And they work tremendously well. Doesn’t make sense to use pretty much any other charging service, except over night charging.

Still I have to confess the Alps really impressed me. The Supercharging network of Northern Italy, Switzerland and Austria is getting better fast. I’d say that’s the next European Tesla roadtrip. But when? I have no idea. I hope soon!