Finnish software company Reaktor organized for third year a row the Devday at Helsinki, Finland. And for this year, there was also for the first time the Designday. This equals some hundreds of people, mostly young software professionals gathering together.

Then there’s me, as a photographer, taking pictures for these two events. 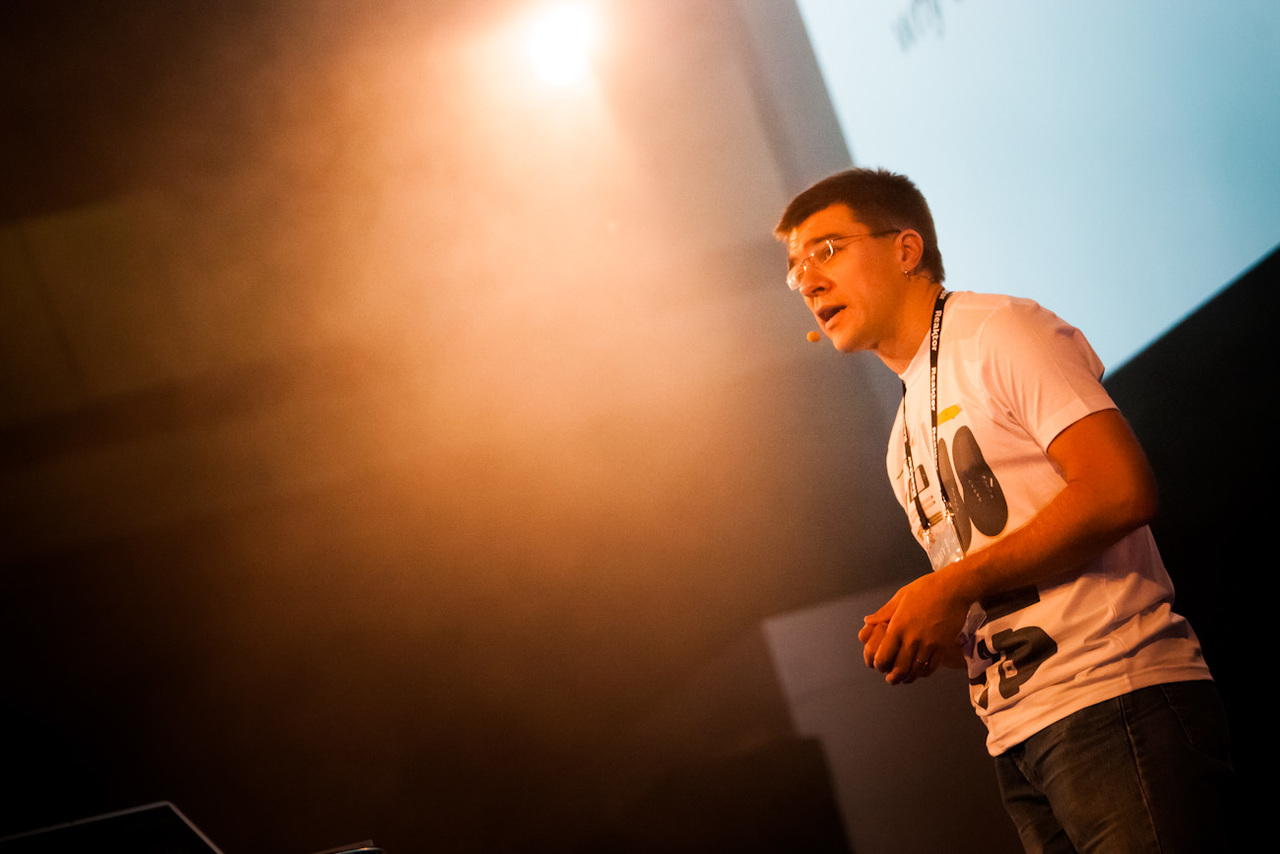 The shot above shows Karri-Pekka Laakso opening the Designday. There’s some smoke in the air, which makes the spotlight at the roof foggy and creates nice contrast. But the light isn’t white, it’s some yellow tungsten, which kills all other hues but yellow. I can promise you Karri-Pekkas skin really wasn’t that colour. It’s the lights. 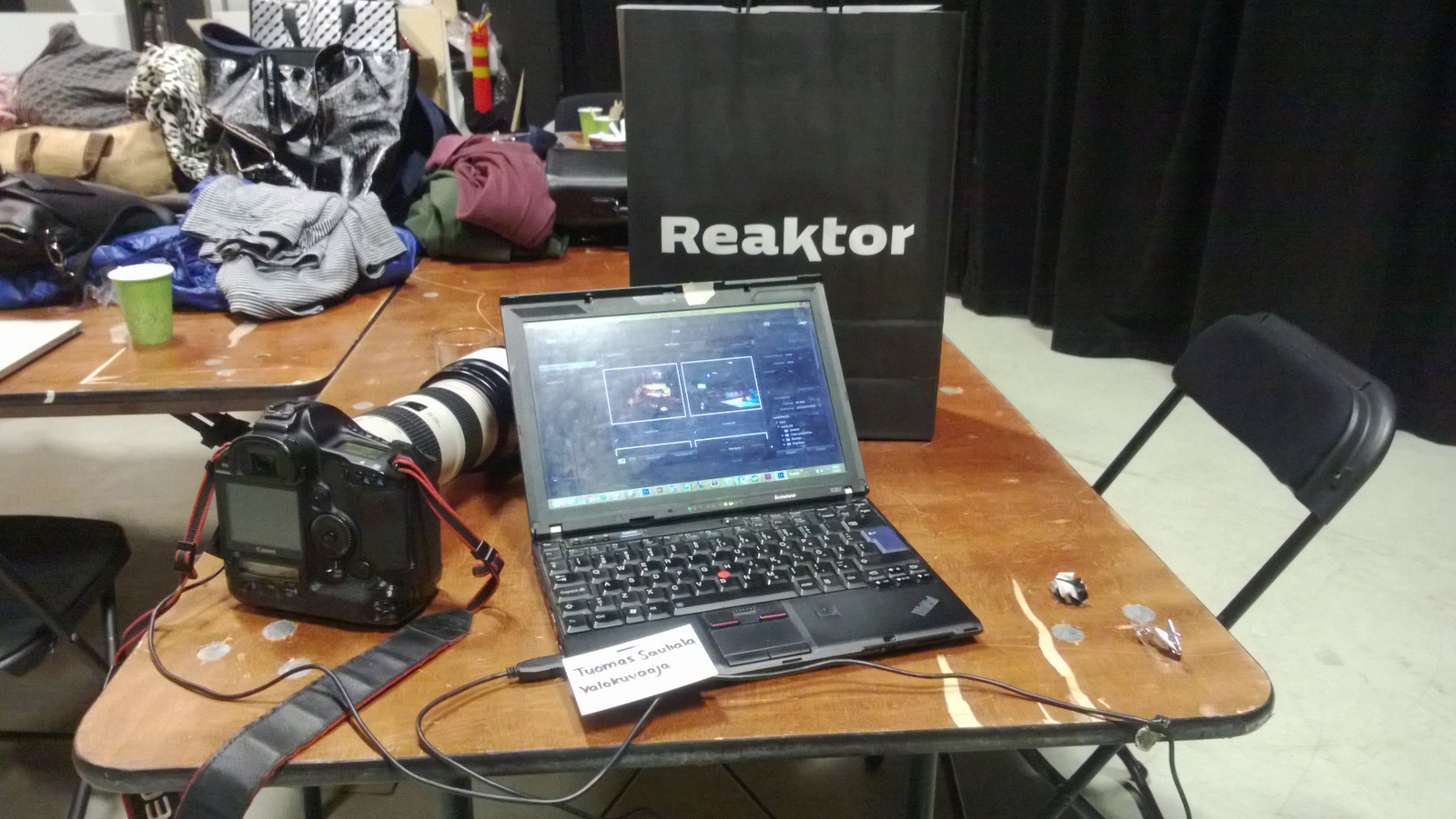 As a computing solution I have Thinkpad x201 running Win8, which I like very much. I just can’t understand those Macs, maybe there’s something wrong with me. 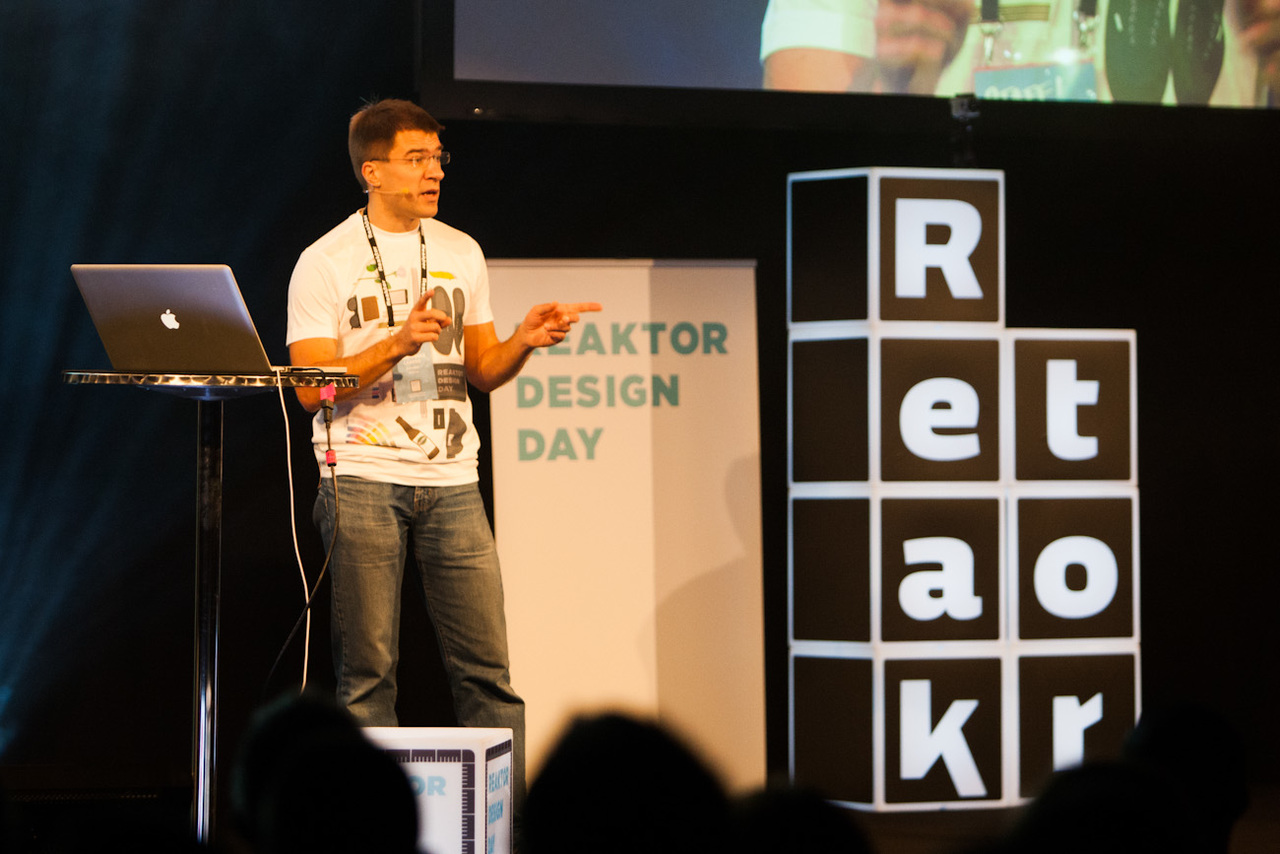 But here, there actually are tones. It’s the same scene, same ambient light. But notice the sharp light at computer screen frame? And some shadow at white Design day rollup? That’s the flash. You may not like the shadow, but off-axis flash really it the key to bring the person on the stage to life.

I consider myself a professional event photographer. Earlier this week I had a nice warming up gig with Tieto and Google, and having done so many other conferences this one was going to be a walk in the park. As I also do web design (it’s the main job of mine, anyway), also the contents of the seminars were going to be interesting. 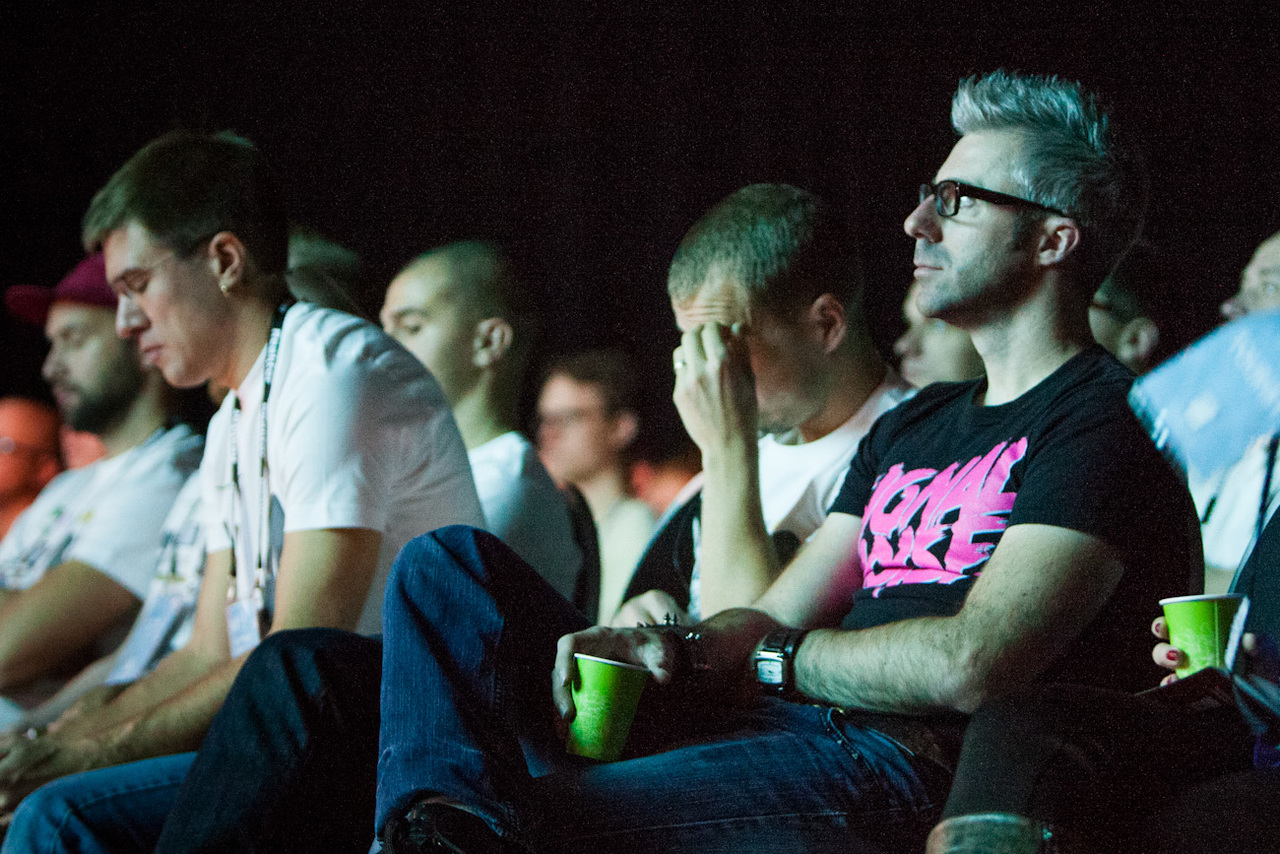 Here we have James White from Signalnoise Studio. It’s extremely low light situation, where pretty much all the light is from the stage, reflected from the screens. So if the current presentation happens to have much white, then there’s also more light for the audience. Mr. White happened to sit at the front row, it made my life a lot easier. The picture is shot with 90mm focal, but it’s still it’s 1/30 shutter speed. Quite long time I would say! Mr. White also sat very still – this also made my life easier.

But well, it really wasn’t a walk in the park: The near-complete darkness of Telakka (the venue). Black curtains on the walls and black roof making it impossible to bounce the flash. The near-absence of natural white light looked good for everyone present, but was veeery difficult with camera. 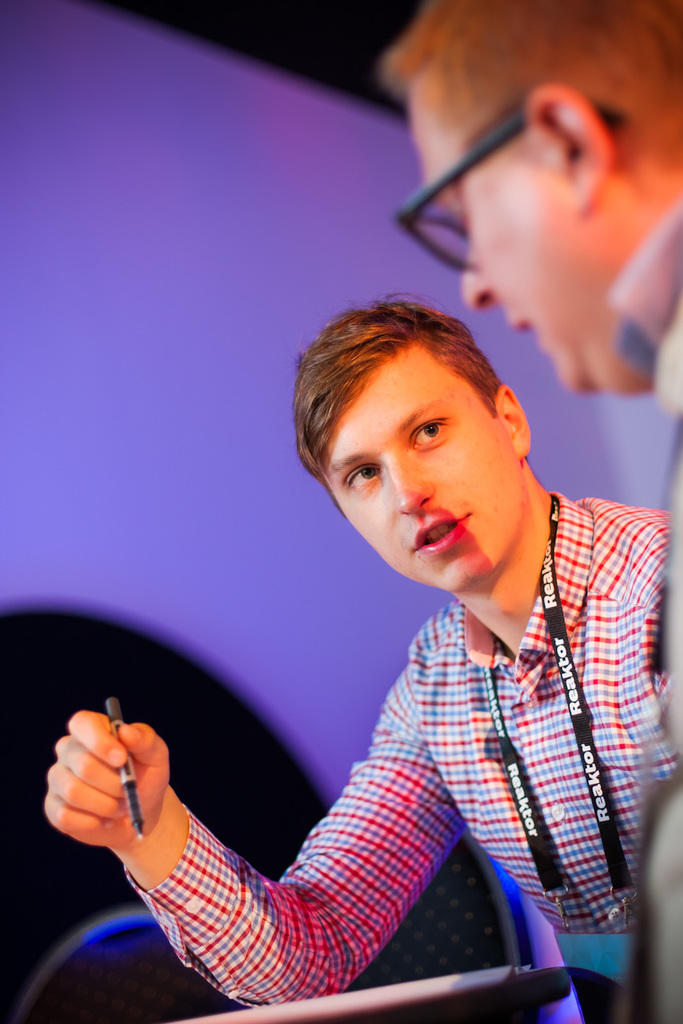 Much of the job is waiting. You take your seat or just plain floor, sit down and wait. Wait for nice smile, right look or just the magical something to happen. Here’s a nice shot with a little additional white on the face (the off-axis radio flash!). The picture is also sharp, it’s not foregone conclusion as the lense is fast (F1.8).

The drawbacks of the lightning and the venue were well compensated with the people and the those little extra goodies like ball pool and Google Glass available. When people can do things and not just stand there, the life of photographer is right away a lot easiear. There’s so much spots to take the picture, it’s overwhelming. 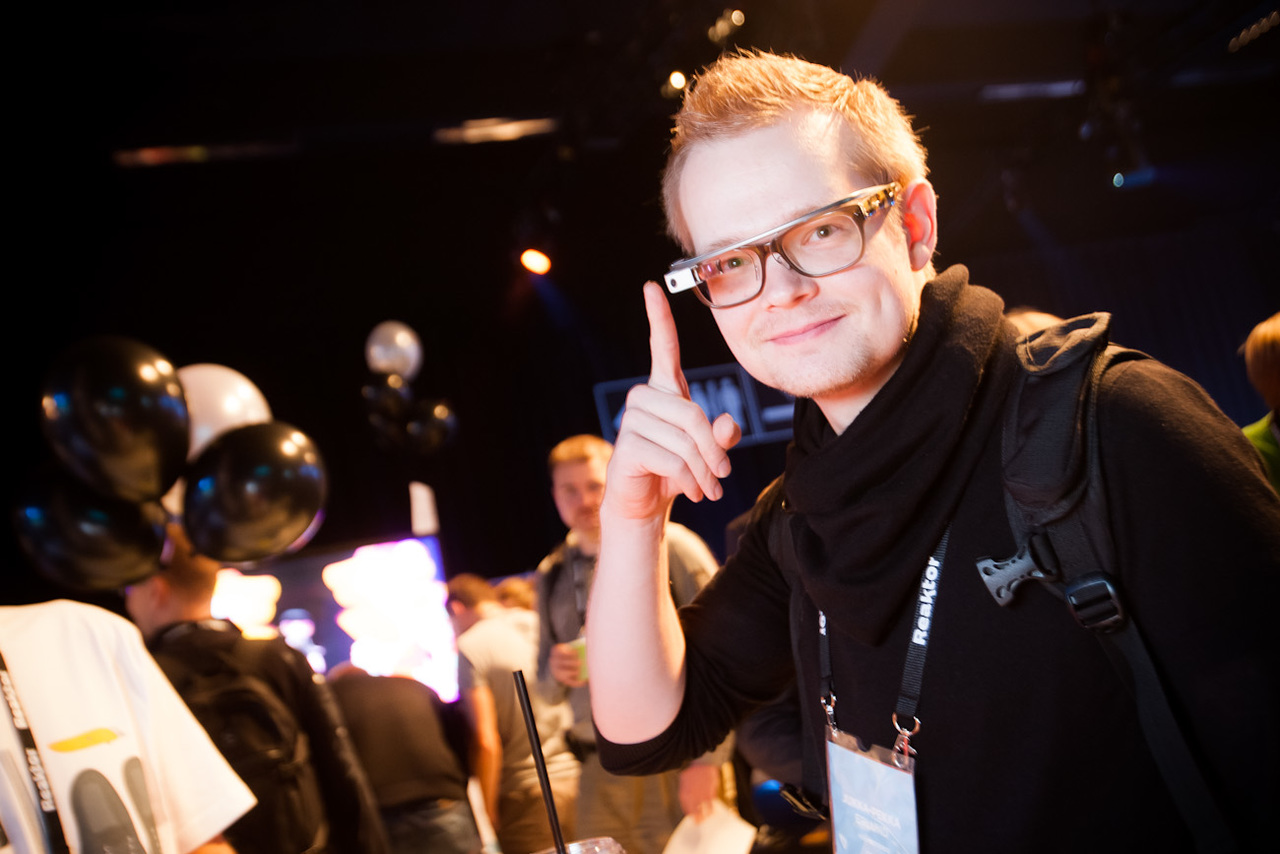 Jukka-Pekka Erlund from Conmio testing the Google Glass. Slow shutter (1/15 s), but also very short focal. And then there’s just a little filler flash reflected from the whiteboard freexing the moment. This filler flash is interesting. I prefer to shoot with non-ETTL. The ETTL drains the batteries too fast. And for some people pre-flash isn’t fast enough, they get their eyes closed. ETTL algorithms also often seem to fail in really dark special lightning like these events. 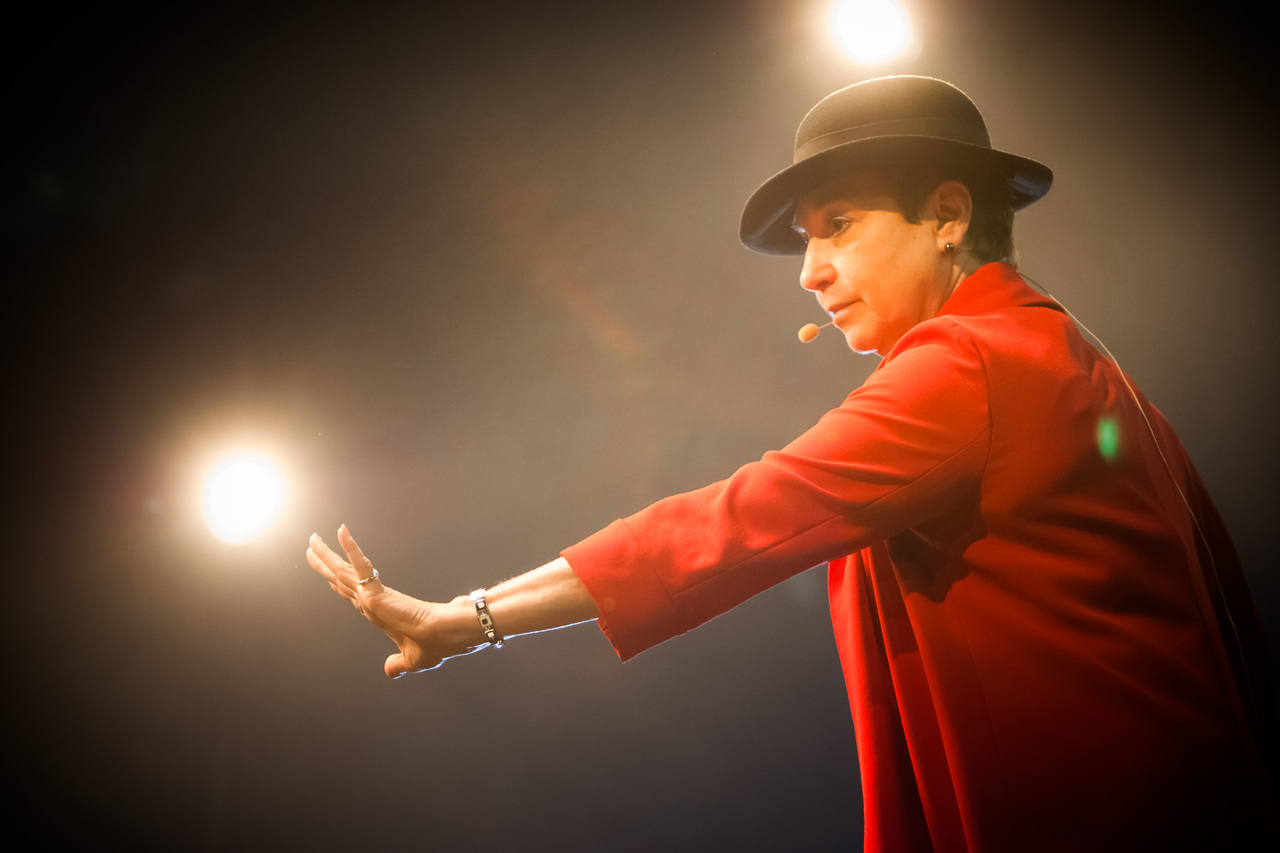 Karen Holtzblatt. You should probably google that right away and then continue reading. The lady had a hat – a nightmare for photographer as it hides the eyes from all light coming above. She also moved a lot and fast – a nightmare for a photographer as the focus always is a hard to get when it’s dark and target moving arbitrary. But for short moments she was still, I had fast feet, there was nice lights at the background and Adobe Lightroom did a great job in light management. 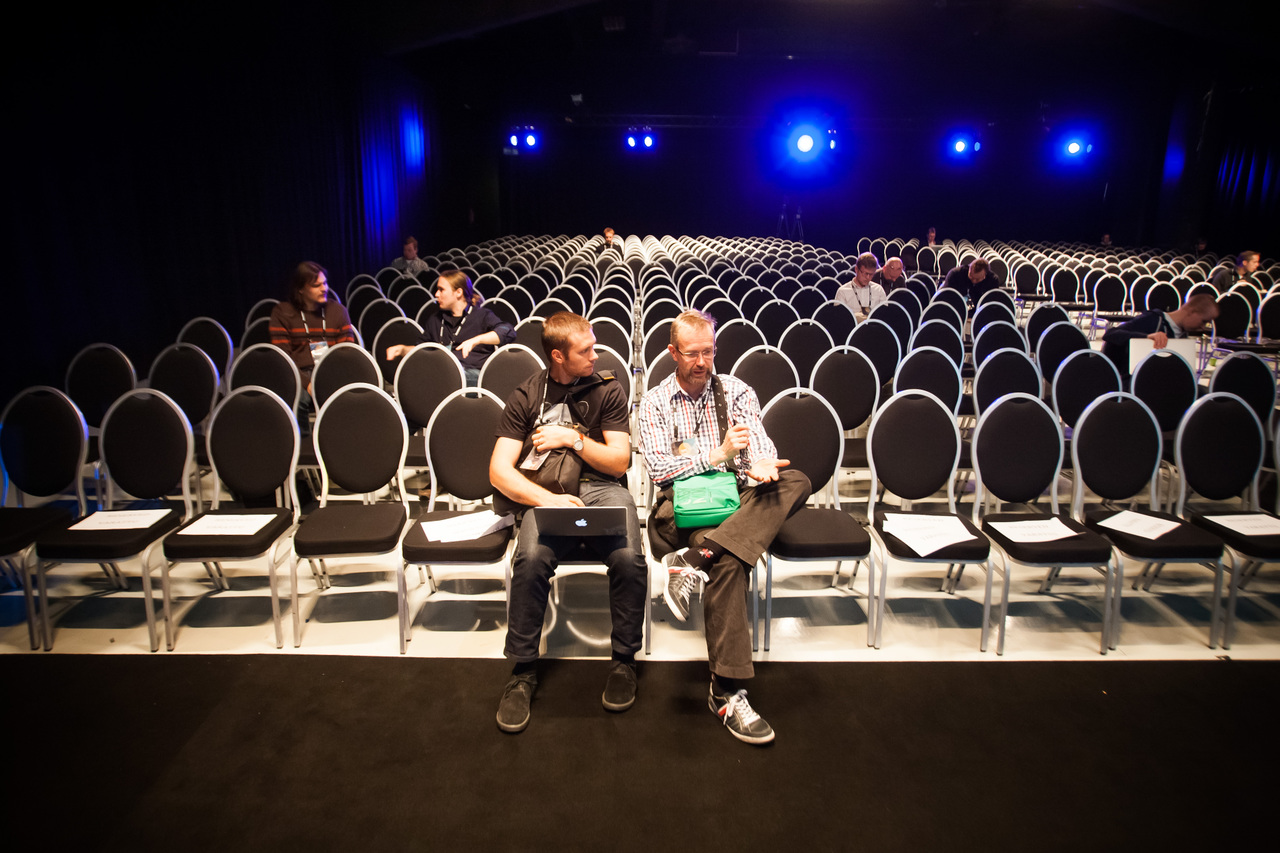 Almost empty hall, with two guys at the front. Sometimes the contrast isn’t just something with colours, it’s also an idea of empty room at an event supposed to be full of people. During the breaks photographer can go to the stage, take the spot and the picture. This picture would have been impossible with full house of people.

So that’s the story for some single shot’s taken at the event. It really was a nice two days. I’ll try to write some more notes later.

Check all the pictures: Design Day and Dev Day.